Points of Contact: Exploring the role of architecture in public social behavior at Amherst College

At Amherst College, social dynamics, especially in public spaces, are shaped in part by a phenomenon known as the “Amherst Awkward”. This is manifested in multiple ways: self-segregation in the dining hall, avoiding of eye contact when crossing paths outside, the lack of a sense of community, etc. I’ve personally been guilty of contributing to the Amherst Awkward at times and many of my peers have had similar experiences. While some aspects of the Amherst Awkward are not necessarily unique to Amherst either, I do think they contribute to students’ unwillingness to develop deeper relationships and interact with each other on campus. The student body at Amherst is incredibly diverse and does not always see eye-to-eye on certain social issues, and any barrier to communication can discourage meaningful discourse between and ultimately widen social gaps between various student groups.

A typical interaction between two people first involves some sort of initiation of contact followed by a reciprocation of that contact, and culminates in a sustained cycle of action and reaction between them (figure 1). When the Amherst Awkward happens, this cycle is disrupted by social barriers. Students will choose not to reciprocate an invitation to interact, or both parties will not even attempt to make contact, and the interaction cycle never kicks off (figure 2). The most alarming aspect of this disruption is that it occurs not just between students who are strangers, but also between students who are already acquainted with each other. In these situations, the Amherst Awkward prevents students who have met from further developing their relationships, and subsequent encounters only serve to further widen this interpersonal divide. 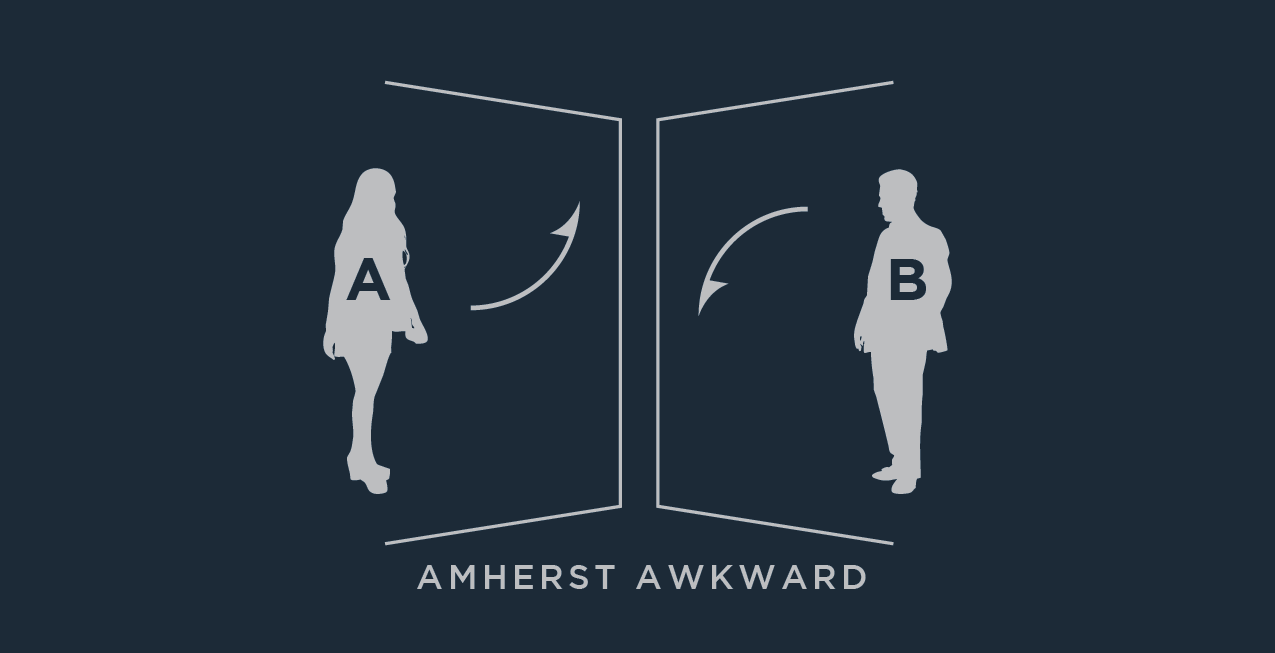 Figure 2. Deflection of interaction due to the Amherst Awkward

My project, Points of Contact, was an attempt to see if the architecture of public spaces at Amherst, in conjunction with the use of technology, can play any role in alleviating the effects of the Amherst Awkward.What happens when you make a fundamental change in architectural experience from static to dynamic? Can social issues, especially in the context of Amherst College, be addressed using interactive art, architecture, and ubiquitous computing?

The idea of incorporating interactive elements into the experience of a space for the purposes of changing peoples’ behaviors has been explored heavily in the past, and has seen a great degree of success. However, one of the biggest barriers to the widespread adoption of these ideas is the fact that they are not widely adopted yet. Introducing interactive or responsive elements in an environment confronts an inhabitant with a new level of awareness and choices which were not present before, and people for the most part are not yet able to respond to them in an intuitive way. This barrier is gradually being overcome with the proliferation of “smart” technologies and the internet of things.

Using a secondary layer of interaction between people and the architecture itself can aid in provoking interaction between people. The concept I developed quantifies the types of interaction which happen in a space and relays this information using a visual feedback system which displays the level of intimacy between people inhabiting a space, based on their movements in relation to each other. I want people to be explicitly aware of when they have the potential to interact with others, and when they’ve missed the opportunity to interact. From my research I developed a framework for creating an interactive environment at Amherst which could be used to get students to interact more. The five components of the framework, and my implementation of those components, are outlined below:

1. The design should have the potential to be ubiquitous

I’m creating an architectural intervention which will be composed mainly of arrays of lights mounted along the currently inert walls of Amherst’s interior spaces. These can be placed in any interior space on campus and will be able to display to any passersby pertinent information about their movements.

2. The design should be located in a public space

I plan to install the design in a public building on campus, and not in a dormitory. Obviously, I won’t be able to give it a high level of ubiquity since I am limited by time and resources, but the concept will be somewhat modular and easily extensible to a larger scale. The Amherst Awkward mostly happens in public spaces like the non-residence buildings, so they would make for ideal locations.

3. The design should be interactive

In order to show the level of intimacy between two people in a space, the colors displayed by the arrays will reflect the “warmth” of the space based on their movements. Using both the speed and position of each person, the arrays will begin glow more red if there is a higher potential for interaction, and more blue if the potential for interaction goes down. When an interaction happens, as determined by a set of predefined parameters, the lights will display a much more intensely warm response. On the other hand, if people choose not to interact with each other, the lights will display a strongly cool response. Using color, the arrays create a constant dialogue with a person, providing a visual reward for interaction and encouraging further interaction through maintenance of this response.

4. The design should initialize the interaction

As people walk past these arrays, the lights will automatically display the potential for interaction by changing color. On top of the interaction that I hope to generate between people, the arrays themselves would add a second layer of interaction between the participant and the installation. Since the arrays will always be tracking peoples’ movements, they will always not only initialize the interaction, but persist in doing so as the people move, and at that point it only takes reciprocal action from a participant in order to maintain the interaction.

5. The design should be playful and hide its implementation

The tools used to detect the presence of a person and their movements will be hidden from a passerby, and the experience will be based on just the glow from the lights. The bright, constantly changing colors will hopefully attract a lot of attention and encourage people to stick around and try to figure out how it works. Covering the lights with some sort of diffuse material will also help make them more mysterious, especially for those who are unused to having an architectural fixture respond to their presence. The interactive nature of the installation also inherently generates a level of playfulness, since the experience would be akin to meeting and interacting with another person.

By continually changing the colors and simultaneously responding to participants’ potential for interaction with each other, I hope to bring them to a position where they can start interacting with each other as well. I used an Arduino microcontroller with a series of sensors attached (infrared and ultrasonic) in order to sense the position and movement of passersby, and individually-addressable LED arrays to display the warmth level and record the quantity of each type of interaction detected.

I ended up installing my design in the entry lobby of Seeley Mudd, an academic building. It contains a circulation space, where the Amherst Awkward frequently happens, but it also has the added benefit of having an attached lobby for increased exposure. 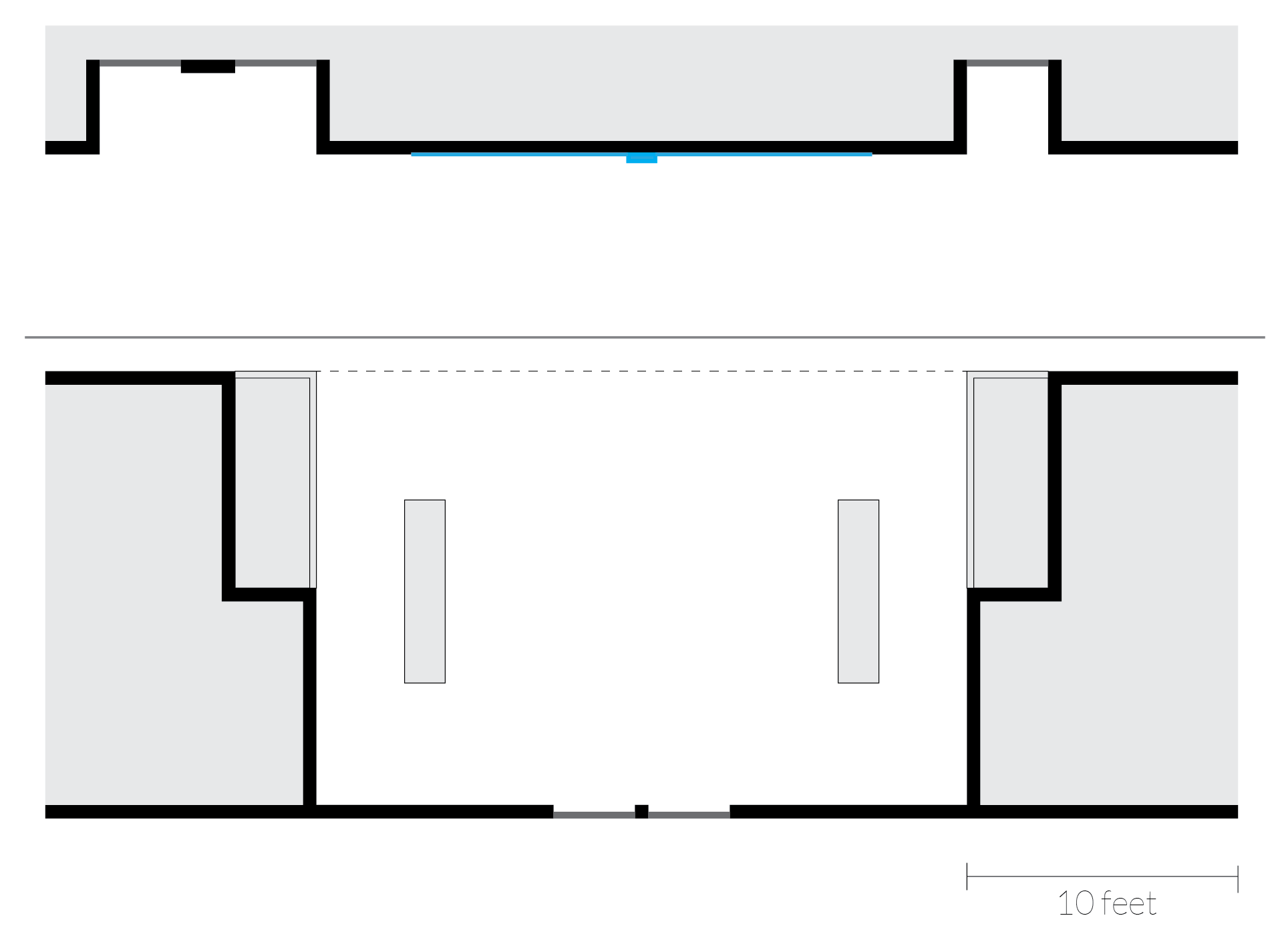 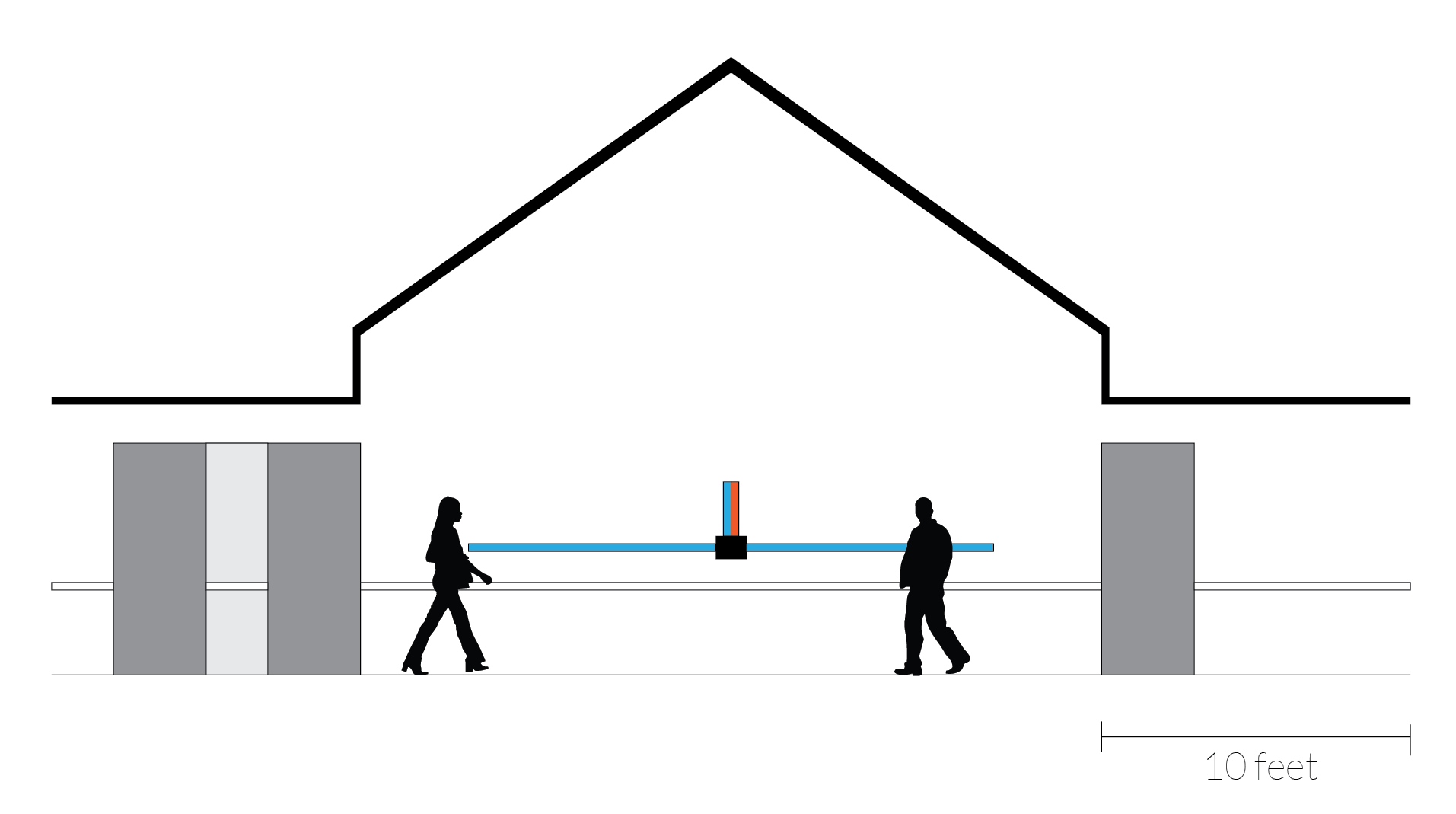 I left the design up for a total of three weeks. My observations of the ways in which people used the Seeley Mudd lobby after I incorporated my design into the architectural experience revealed two significant takeaways:

2. people can become accustomed to interactive architecture over time

The quantity of each is recorded and displayed on LED strip meters. Each meter uses the color corresponding to its interaction type, and can track up to 52 interactions each (four for each individual LED). By resetting these meters every night, I could roughly compare the differences in interaction between each day. Generally, the amount of missed connections stayed relatively high throughout the second two weeks when the installation was actually turned on. This is not unexpected, considering the fact that not everyone has the time or patience to stop and talk with someone else. Over the course of the three weeks, the readings on the made connections meter changed drastically. The readings were initially pretty erratic between days as people were discovering the installation and figuring out what it did. Later on, the readings began to steady out, and the number of made connections actually grew over time.

I observed instances where someone would approach another person who was trying to figure out how the installation worked and inadvertently set off the made connection sequence. The two participants would then interact with each other as they tried to figure out what they had done to trigger it. I saw a number of variations on this type of interaction occur and I think these were the most valuable results from the installation. Even though the installation itself became a topic of discussion rather than a tool to aid discussion, it shows that the interactive components were able to influence participants to a desired course of action, and that Amherst students are actually willing to talk to each other and collaborate toward a common goal.

It may be a while before interactive architecture becomes a widely adopted fixture on the Amherst campus, and it may be a while longer before Amherst students are influenced to interact and learn from each other on a deeper level, but the potential for change does exist. Even at a small scale, interactive components had a non-trivial impact on student behaviors in a public space. The students at Amherst want to interact, and existing public spaces can be used to improve interpersonal relationships and engender a better sense of community. 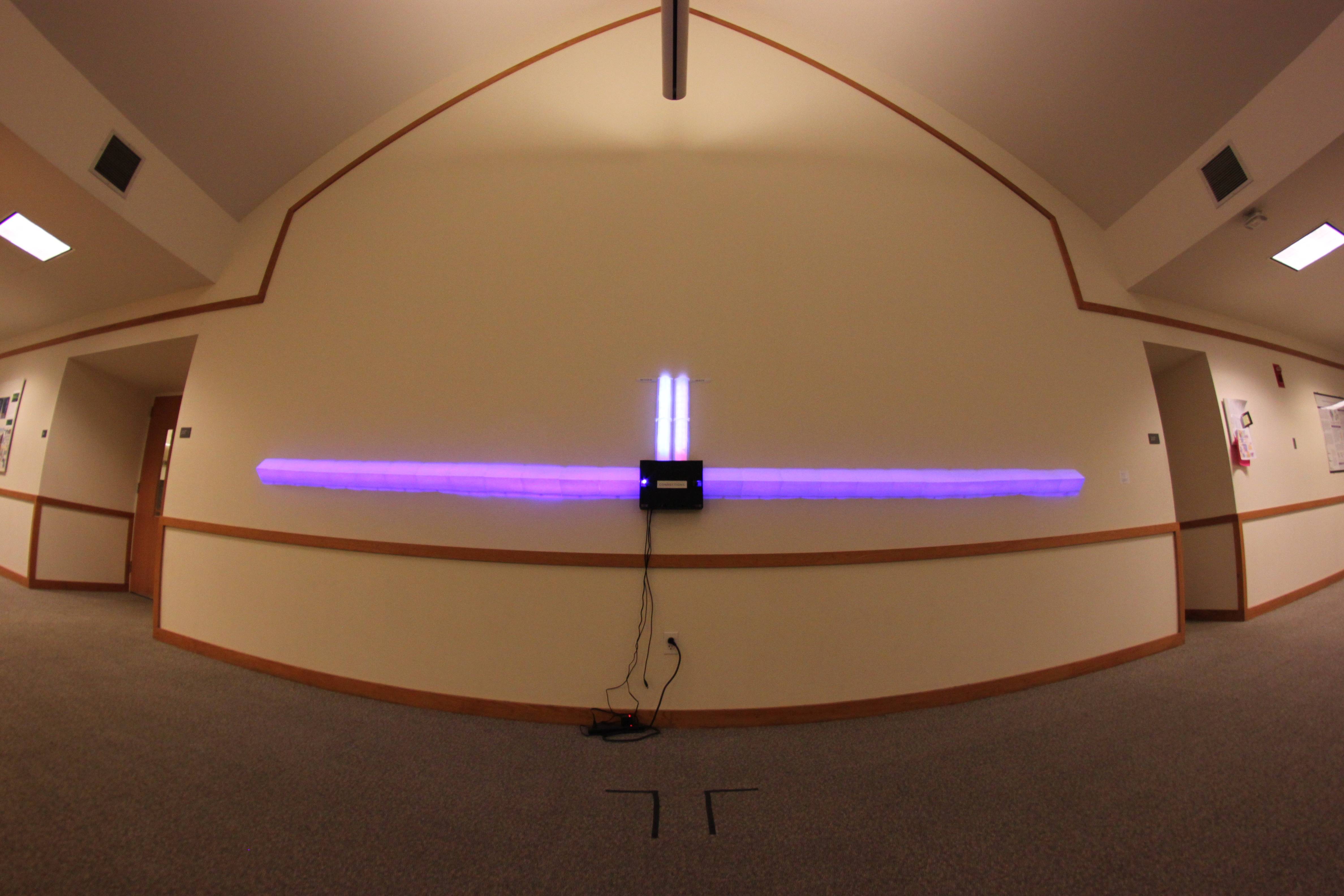